Every winter, municipalities, counties, private contractors, and state departments are tasked with the same challenge: keeping roadways safe, while conserving salt to stay within their budget.

With this in mind, the MESP 300 Series was developed. It is an electric controller, wiring harness, weather resistant enclosure, and cartridge valve manifold in one system.

The MESP 300 Series has been designed for easy operation and installation. Unlike other models with complex operations and extra settings, the MESP 300 is a basic, yet efficient and effective system.

While the MESP 300 Series achieves this balance and serves as a solution, the system also offers many other key benefits including: simplicity of operation, driver safety and versatility.

One of the key features of the MESP 300 is that it measures the groundspeed of the truck and adjusts the output of the salt spreader. This allows for there to be a consistent material density in pounds per mile to be applied.

The MESP 300 Series ensures that salt is being distributed proportionately unlike manual spreader valves.

With electronic systems like the MESP 300, it’s consistent when it comes to spreading material. It’s next to impossible to be consistent with a manual spreader system because the driver cannot constantly be making adjustments on the output level. Additionally, the driver’s only reference is what they see in the mirror.

Several trucks across the country continue to use manual spreader systems, which means salt continues to be distributed disproportionately and wasted due to the lack of automation.

With electronic systems like the MESP 300 Series wasted salt at intersections is no longer a concern, as the system automatically shuts off when coming to a stop and spreads proportionately to the truck’s groundspeed. 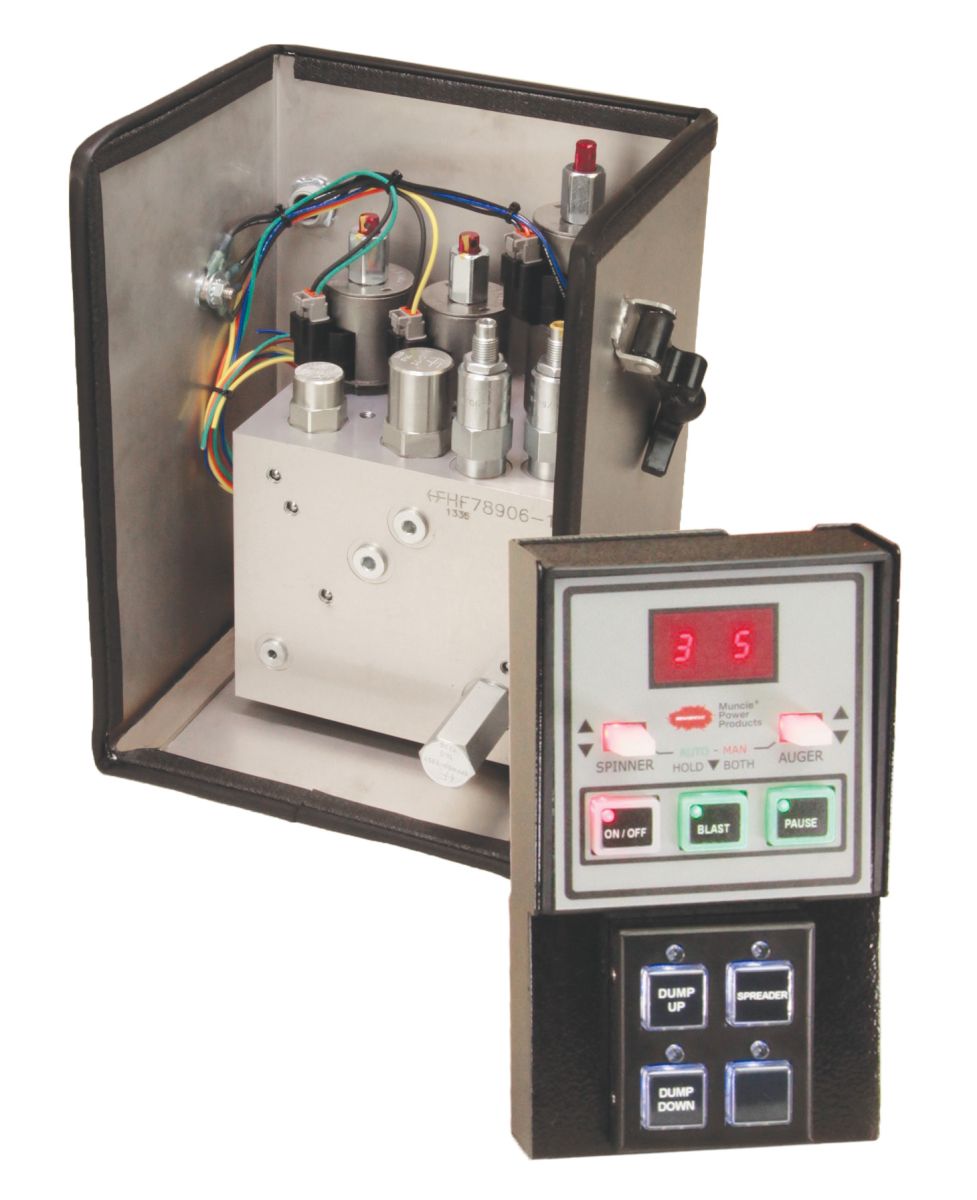 With the MESP 300 Series, there are no in-cab hydraulics. Resulting in a safer and more comfortable environment for the operator because it eliminates noise, heat, fumes, and possible injury. It also removes the chance of oil spills of high pressure fluids within the cab, which could harm the operator.

The controller has adjustable trim settings to adapt to your requirements:

Unlike other spreader systems the MESP 300 Series has been designed to fit just about any kind of truck in operation—both new installations and as a replacement for manual spreader valves—and is easy to retrofit.

The enclosure comes with stand-off mounting brackets and draw-tight latches for the lid making it easy to install. The ability to route a wire harness to the cab is much easier than to route hoses to the cab.

This turnkey package includes the in-cab controller, wiring harness, and hydraulic manifold which comes housed in either a powder-coated or stainless steel weather-tight enclosure. The manifold can be modified to work with either open center or load-sense applications. It comes with everything you need to control flow to a stand-alone spreader circuit or can be added to your existing stack valve system.

Additionally, there’s no password to put in to slow you down during the install and no unnecessary features to add to the cost.

The MESP 300 Series can work on 1-ton trucks up to Class 8 trucks, and can control flow to spreader bodies, such as Swenson, Buyers/Salt Dog, Frink, Henderson, Monroe, Fisher, Schmidt, and many others.

But how do you know which MESP 300 Series option to choose? Take a look at the chart below to help you determine what you need.

No matter the size or type of trucks that you have, Muncie Power has the control that you need.